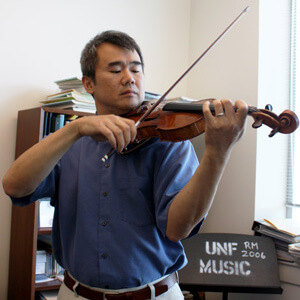 Dr. Simon Shiao is an Associate Professor of strings at the University ofNorth Florida, where he also directs the university orchestra. From 2005-2007, Dr. Shiao held the title of Gerson Yessin Distinguished Professor of Music at the University of North Florida. A versatile performer, he has the distinction of having performed at Carnegie Hall in three different capacities: as a recitalist, and with both string quartet and orchestra.

Dr. Shiao has appeared around the world in concert, as well as on broadcasts of CNN’s Science and Technology program and on Public Radio’s Live on WGBH Radio. Highlights of his performances include concerts at the Museum of Oceanography in Monte Carlo, the U.S. Embassy in Vienna, theBliss Centre for the Performing Arts in Belize, the Isabella Stuart Gardner Museum in Boston, and as soloist with the New World Symphony in Miami. He has also appeared at the Banff Centre for the Arts in Canada, A Winter Festival in Jerusalem, and the Heidelberg Schloss Festspiele in Germany.

As co-concertmaster of the New World Symphony, Dr. Shiao led that orchestra at Davies Symphony Hall in San Francisco under direction of Michael Tilson Thomas and John Adams. He currently performs as a violinist with the Jacksonville Symphony Orchestra and with the Grand Teton Music Festival Orchestra in Wyoming.

Dr. Shiao has adjudicated the Music Teachers’ National Association Young Artist Competitions, and has presented lecture-recitals and masterclasses at numerous universities and conservatories in the U.S., Belize, China and Taiwan. He is currently the chair of the solo competition for the Florida

Chapter of the American String Teachers Association. Dr. Shiao holds aBachelors degree from the Manhattan School of Music, and Master and Doctor of Musical Arts degrees from the State University of New York at Stony Brook.